2017 Mash & French Toast by The Bruery is a 13.4% ABV Barleywine aged in Bourbon Barrels with Vanilla, Cinnamon and Nutmeg, Natural Flavors and Maple Syrup.

Label:
NO UTENSILS
We took Mash, drizzled it with more gooey barrel character and added a morning mix of spices and maple notes.

This is our bourbon barrel-aged barley wine ale, Mash, joining forces with even stickier malt-forward forces from our barrel warehouse to create the gooey-sweet profile you’d expect from a French toast-like creation. It rouses the senses with hints of caramel and rich maple character, summoning spices and warm vanilla notes.

Released to the Reserve Society in 2017 with a possible release to the public. This is a new iteration for the Mash series. There have been many variations recently ranging from coffee, vanilla, coconut and now French Toast. The last time I can remember trying a French Toast like brew was when my friend Aaron Mendiola from BeerMetal.net sent me the “Brunch Money” by Armadillo Works in Texas. This one is quite unique as there aren’t many “French Toast” beers out there in general but based on the addition of ingredients in this beer, I can only tell that this is going to just like or close to French Toast as possible. Let’s take a look and see how this one is, cheers!

Overall:
Ridiculous! This is damn exceptional! A bit boozy but will sure as hell age like a beast. Even now, I could tell, this is literally, freaking French Toast in liquid form. Granted, time will mellow out the slight alcohol from the flavor but to be honest it does not bother nor detract from the amazing flavors this already has. Yes, it is a brand new batch of barleywine right off the barrel but even so I can see how this will age awesomely. Their Mash series is definitely an amazing series and I hope to see more in the future. I highly recommend this one.

Anime Corner:
Q-Bee from Darkstalkers was chosen even though the beer is made with maple and not honey. The reason I went with this because just like honey, maple syrup is just as sticky and added to breakfast items like French Toast or waffles was similarly sweet. Even the design of the label was closer to a honey comb. This and the fact that Q-Bee’s weapons are utensils, I think it worked out nicely. Bees are attracted to sweet maple syrup too! 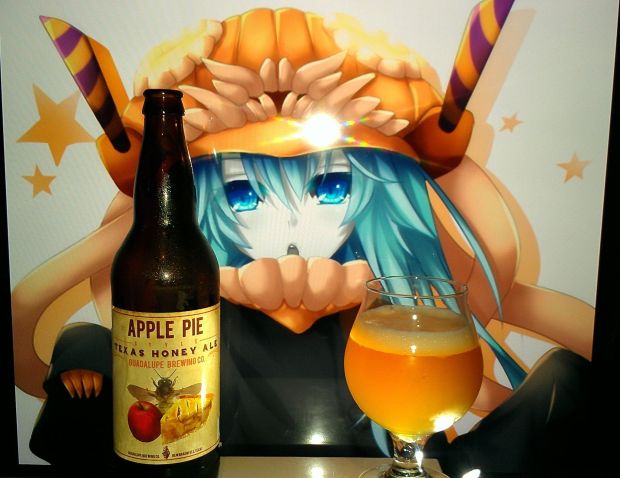 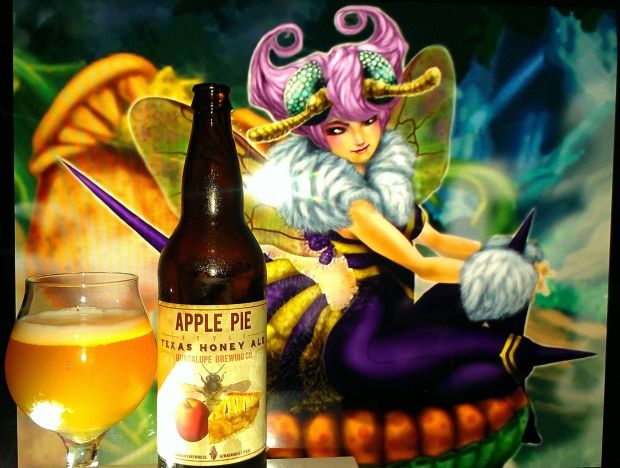 Label:
Bottled Date: 12.30.15
Using Our Texas Honey Ale as a base we added apples and spices to make this a crowd favorite

A share from my friend Aaron Mendiola of BeerMetalDude.com, this brew seemed the best one to start the box my friend sent of sweet sweet Texas nectar. Based on what was used for this one and what it’s going for, it does seem like a delicious dessert in a bottle. I think having said this, there hasn’t been an apple pie beer made directly with the intention of tasting like apple pie so definitely is a unique one for sure. Let’s have a look.

Overall:
Damn exceptional brew. It really does taste like what they were going for, delicious apple pie and honey. I tend to lean towards beers that taste a lot like they said they should taste and as a result, these beers always get the best scores from me. I really like beers that taste like something specific and especially those who are so complex and rich with flavors. This beer proved to be many of those things so I would highly recommend it if you can find it.

Anime Corner:
Wo-Class from Kantai Collection (KanColle) and Q-Bee from Darkstalkers were used to pair with the label of the bees but also the colors of the honey and sweetness that is the beer. The complex colors they represent also represent some of the flavors of the beer like the apples and citrus for example. 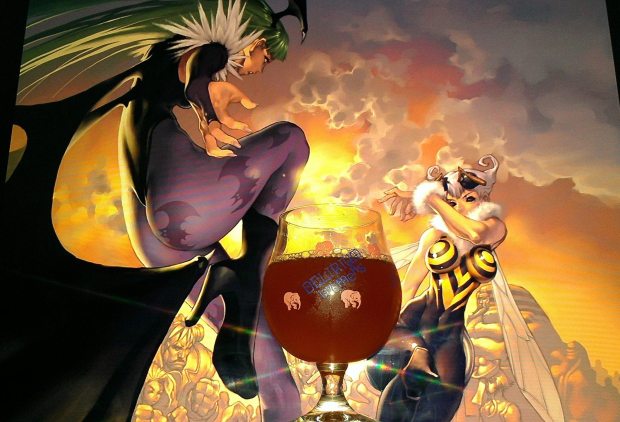 Project #7 was my take on the famous hoppy Belgian Tripel IPA, La Chouffe Houblon Dobblen IPA tripple but my take was using a variety of other ingredients such as Columbus and Amarillo hops and using Arizona Wild Flower Honey. Yes, the ABV does have a story to tell as my original gravity was supposed to keep things near the 9ish% ABV but instead went to the 11% ABV range. Literally a Triple IPA that is also a Belgian Tripple. What a Trip? Especially considering the name. Waggling and Dancing, don’t fall and “trip”now! Cheers!

This brew was born on National Homebrew Day when I brewed with my friend Richard Stan Avila of Avila Ales, one of my great friends and fellow homebrewer. A great brew in a somewhat of a collaboration as great beers are made with great friends.

Aftertaste:
Lots of sweet caramel, tropical fruit hints, Belgian candy sugar, bananas
Slight booziness in the taste which is covered by honey and malt as it warms up, Golden Honey Amber, light to medium body, smooth crisp, syrup and creamy mouthfeel and a moderate to sipping drinkability.

Overall:
I’m well damn impressed. The fact is, I did not get the carbonation right (Still learning 😦 ) But… the beer itself was well damn amazing. The beer has lots of great flavors reminding me of the La Chouffee Dobblen IPA Tripel but taking it a step further into like a Honey and Barleywinesque territory. The fact that I used Amarillo hops most likely makes the difference in the enhanced excotic fruitiness but either way, this beer is ridiculously delicious and is something I would love to make again.

Anime Corner:
Morrigan Aensland and Q-Bee from Darkstalkers/Vampire Savior were used in this pairing because I wanted to show how the fusion of the honey and hops combine by doing a dance mainly done by bees called waggling. Do bats do the “waggle” too? Maybe, maybe not but both bees and bats are in your face enemies in some 2-D platform games that become annoying. The fact that I found this pic thought was a major tribute to some of my favorite characters to the Darkstalker series but also one of the greatest compliments to the Belgian IPA as Morrigan represents the dark fruits and hoppy goodness while combining with the floral rich honey and sweetened condensed milk and citrus provided by Q-Bee all fusing in a beer that is probably way better than the original Dobblen Trippel IPA from La Chouffe. Although I can only hope.

Me So Honey by Belching Beaver is a 5.5% Blonde Ale brewed with Honey.

Label:
Me So Honey. This Ale brewed with honey is an easy drinking anytime beer. Brewed with local wildflower honey, Me So Honey is smooth on the palate showing its wheat character up front with hints of flower and fruit on a clean, refreshing finish.

Just in time for spring, although this is a year-round beer, I wanted to bring this forth this time around as I have not reviewed the beer here on the site in the past. The first time I tried this beer was when I was on my way to San Diego and stopped by Belching Beaver brewing. They had awesome beers like my favorite, the peanut butter milk stout, the horchata milk stout and their new one, coconut milk stout which I hope will one day be released to the public in bottles or even growlers. When I first tried it, I was amazed. They really got the rich honey flavors to pop and so when I saw it at the store, I said, screw it, I am bringing it to the site. So let’s take a close look at the bee knees here. Cheers!

Overall:
A very good ale with rich honey notes. Needless to say, it is not the best honey beer as I give that to the Belgian beer Bieken which I had long ago. However, it is the best specific honey flavored ale that is the most drinkable and was the riches specifically with honey. For that, I think it is very awesome and definitely would recommend the seek. It is not overwhelming and is very pleasing to many palates.

Anime Corner:
Q-Bee from Darkstalkers/Vampire Savior was used in this pairing to go with the name of the beer and flavors that come with being a sexy honey bee! She is very sexy and the way she looks at the viewer with the honey is very seductive and suggests that she really wants that honey and more! What a perfect and honey sweet pairing we have here.