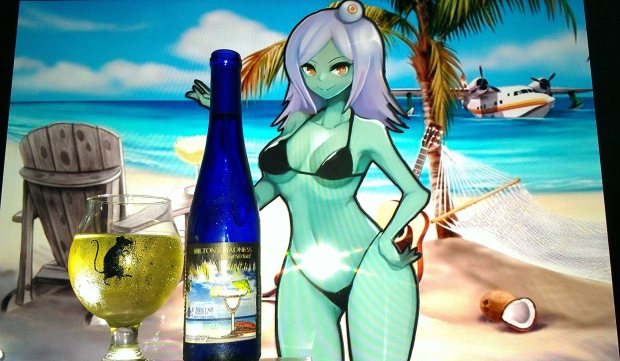 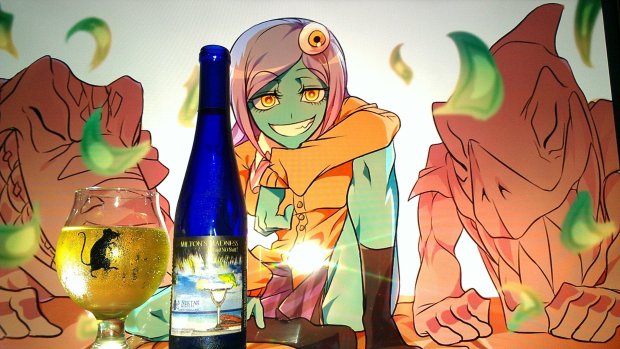 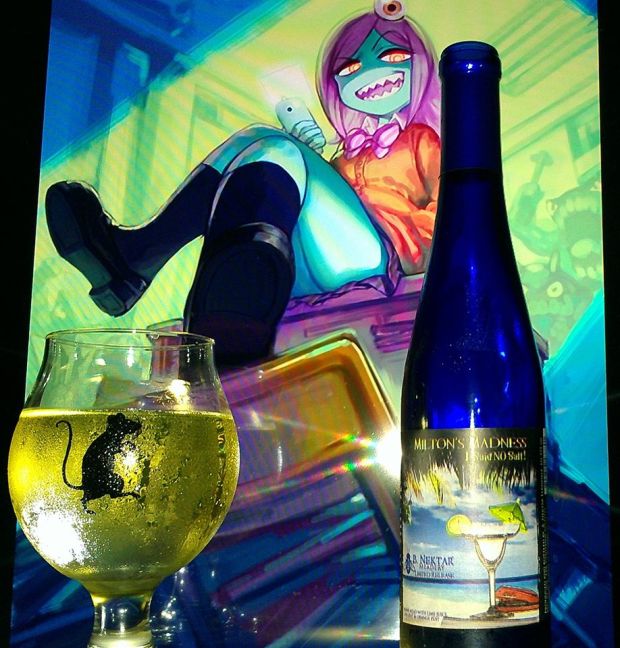 Milton’s Madness I Said NO Salt! By B. Nektar Meadery is a 14% Agave Mead/Melomel made with Lime Juice, Lime Zest & Orange Zest

Label:
Hello, B. Nektar fans, what’s happening? Did you see the memo about the margarita-style wine cocktail? You see we’re putting this bottle out in the market, so if you could just go ahead and buy one, that would be great. Mmkay? oh, and uh, if some no-talent ass clown asks you if you have a case of the Mondays, don’t set the building on fire. Fix the glitch and avoid confrontation whenever possible. Terrific, thanks.

Damn it feels good to B. Nektar.

==Introduction==
Office Space is an awesome movie. Some beers have come out in the past to theme with the movie. But this is the first time I see a mead, and damn, what a mead! One made with the intension of being close to a margarita as possible. Well, it is more of a melomel as the mead did ferment with Agave and fruit. I think the fact that since this is to pay tribute to Milton and his stapler, it really made me want to get it. It is a pricey mead but I do crazy things sometimes for the site and the fans that read my reviews. Appreciation before purchase is pretty important to the consumer base. So let’s see how this one goes, Salud!

Overall:
Taste just like a margarita if was blasted into the wine category with pure lime and agave goodness. What really takes this mead or melomel to the top is its very rich flavors. It is almost like a Margarita, without the salt ofcourse. While it does have some fruity complexity, the intention and the theme is what really drives it home. This and the fact that it is a pure Agave mead also sets it perfectly in the style of what they were going for. I highly recommend it and if you can get this goodness on tap, the better!

Anime Corner:
Midori from Space Patrol Luluco was used in this pairing to mainly go with the colors of the beer. Mainly Green as Midori is Japanese for Green. However, the sour and sweet like demeanor of Midori is pretty unique in the show and fitting in for the stubborn and whiney Milton was perfect to go with the overall pairing. The fact that I found some of the perfect beach pictures further enhances the eye candy to make it a great pairing. 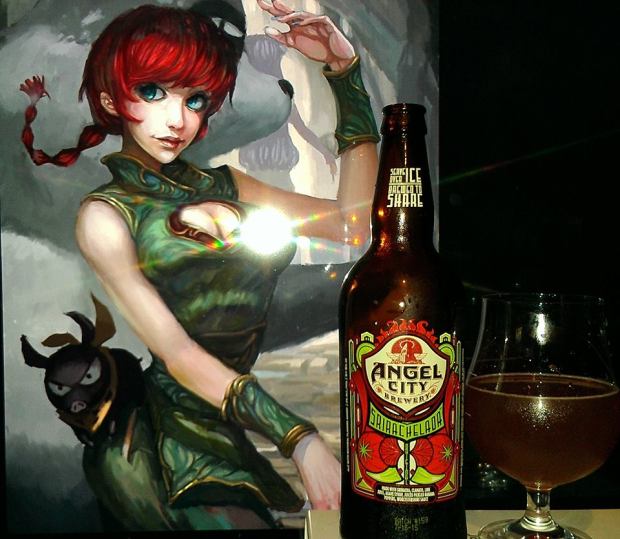 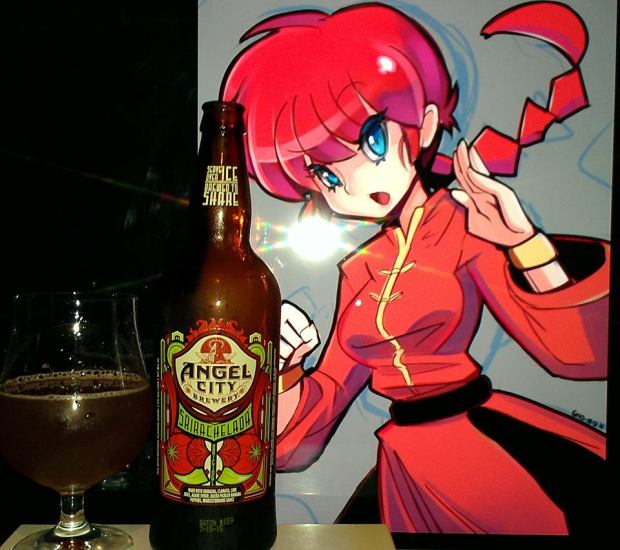 Label:
Serve over Ice—Brewed To Share
Not you Abuelita’s breakfast beer.

Angel City Brewery is committed to the continued grows and revitalization of our urban neighborhoods by being a supportive partner of the arts and business communities, as well as the burgeon craft beer movement in Los Angeles.

This is the first time I tried a bottled beer from Angel City here in Los Angeles. I have tried a lot of their other stuff on tap but to be honest, even for being part of my home town, I feel that they are still in the early stages of being as delicious as some of the other beers out there I have tried. I usually try pretty unique stuff or even great things I have heard about but when I first saw this beer, I think it finally hit me. I have to do a review on this one and see how true to it’s flavors is this. Essentially, they have done other beers like an Avocado IPA which I have yet to try but also it has not been bottled so I guess until I see something more unique from Angel City, I will bring it forth. This is great start as beer geek aside, I really like some delicious Micheladas, yes the Mexican side of me speaking. Cheers!

Aftertaste:
Heat from the peppers and Sriracha linger but the flavors of the salt, lemon, Worcestershire and Clamato tomato juice linger for a bit. No alcohol in the taste, spicy, crisp and refreshing mouthfeel, Redish Gold medium body and a easy to moderate drinkability depending on your heat tolerance

Overall:
Hot damn! This is spicy stuff. The main reason I give this one a good grade is not for being complex but really for putting the true flavors of the ingredients forward. If you don’t like spicy chile beers, Sriracha or Micheladas, don’t get it, but if you are one who loves his Sriracha and lots of spicy beers, this is a must try! Yes, I will admit, this is way more different than what I have had from the tap stuff. I think I will reexamine Angel city to see how their bottling line is in comparison to their tap, that is, if there is something really amazing or sounds like wise.

Anime Corner:
Ranma-Saotome from Ranma ½ was used in this pairing mainly since she has an awesome tomato hair color but also the colors she wears compliments the flavors of the beer like the lime, peppers, and agave syrup. Micheladas are mainly red as the Clamato tomato juice actually has a higher consistency than the rest of the ingredients, even if this beer is only slightly red. 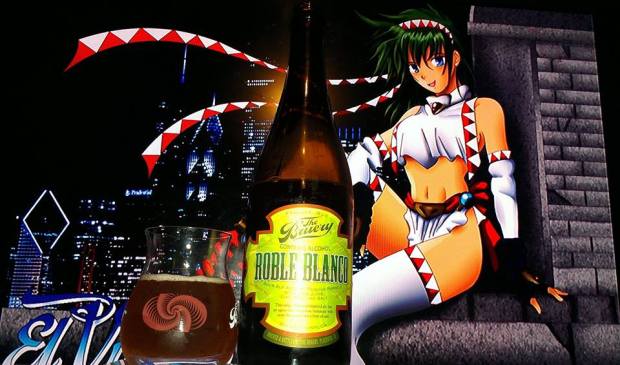 2014 Roble Blanco by The Bruery is a 15% ABV Wheat Wine/Sour Ale Aged in Tequila Barrels with Lime Juice, Lime Zest and Salt.

This tangy, Mexican inspired ale has an agave-like sweetness, balanced with zesty limes and just a hint of salt.

Living in Southern California, we’re huge fans of both Mexican cuisine and, of course, Mexican cocktails. This is a tribute to our favorite blended fiesta beverage
___

Obtained as part of the Reserve Society membership, this beer was released as one of the mystery beers that was on the list for October. This beer is essentially a sour wheat ale that was aged in tequila to try and mimic the flavors of a margarita. I don’t know what to expect from this one. My only hope is that it is not too sweet or too sour but just right. I tend to gear more toward a balance when it comes to sours.

Overall:
Such a damn resemblance to the salty lime tequila margarita it ain’t even funny. You really have to like that drink in order to understand how this one works. However, the only thing is that it is not overly sweet and the salt and lime clash for the balance to salty, sweet and sour. This cause the beer to be more balanced than a true sour. I had to stop drinking this for a while because it was way to damn drinkable for my own good and it was so delicious. Also that part of me that loves lemon and salt kicked into high gear so I may sound bias in my review but this one one hit certain sectors of flavors that were really awesome. I highly recommend it if you can find this one and you really like tequila, lime, salt and a ton of complexity.

Anime Corner:
Annet Myer/Futatabi from El Viento series was used in this pairing to go with the colors of the label but also the name as the work Roble means strong but also the act of aging which coincide with oak and tequila barrels. The rustling of lime trees to the wind or El Viento also link to the beer but also Annet herself since she has the colors of a margarita, she is the Roble Blanco or strong White and she is from Peru meaning Latina. She may not be Mexican, but she is bad ass and her magic abilities (Complex flavors) and strength (ABV) as well as the fact that she is fast as El Viento/TheWind (Smoothness) is enough to mess you up if you dare take her on!