Weakness Is worn on the sleeves. Boldness Is within the heart. This intensified blend of barrel-aged Double Bastard Ale is all heart baby. The weak will find it to be a telltale heart. It knows of your fallibility. It smells your fear. The heart of this beer disdains you, as it disdains all things homogenized, wimpy and uncultured. You do know the truth of yourself, no? If you hesitated to answer that, if even for a split second, that in and of itself is telling. If you aren’t capable of knowing the reality of yourself, this beer can and will take the responsibility of informing you of what you should already know. (And it you’ve lost your way in this text already and no longer are clear about what I am saying, your reading pace has exceeded your comprehension pace. Go back, slow down and start over, bright eyes.)

Take a deep breath. Let it out slowly. Evenly. Give yourself some positive affirmations. Breathe deep again. There. Feel better? If you followed those instructions, then set this bottle down and back away immediately, you new age poseur. Fight or flight and I’d recommend the latter for you, tiger. Wet paper bags are more your speed.

My love for double bastard never ceased ever since that fateful day where I had the dream I would try it. Since then have had so many variants and now as I get close to making my own version of the delicious Midnight Brunch Double Bastard, Stone/Arrogant Brewing released a wild one from left field. I didn’t think much of it but when I saw it was made with Islay Scotch Whiskey, I definitely thought, this is a must try for sure. Of all the spirit aged beers that I have tried in the past, the Islay Scotch aged is one that is so rare, I last tried a Brew Dog Stout that had this a long time ago. So for stone to release this, this is a truly special occasion indeed and the name fits it perfectly. Cheers for many more from the true Kings of Beer, the Arrogant Bastards!! 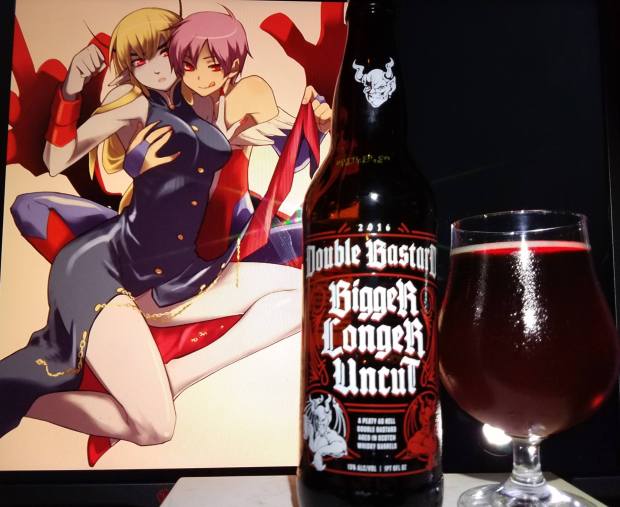 Overall:
A bit above exceptional! This is very damn special. A very unique Bastard indeed. Very different type of smokey goodness that definitely comes from the Islay Scotch. The Double Bastard is there but changed big time by the unique flavors presented in complexity of aging in the special spirit of the Islay Scotch. Definitely not for everyone and as Arrogant Tradition goes, many may or may not like it but if you are a fan, I say you will. Go get this Bastard!

Anime Corner:
Lilith Aensland and the many Darkstalkers characters were used in this pairing as I wanted to go with a movie like theme and keep Lilith as the main character as she has been for the other Double Bastards. She even has somewhat of a director’s uniform. The theme of Doubles with Jedah and Morrigan have been a part of the theme since the original double bastard. 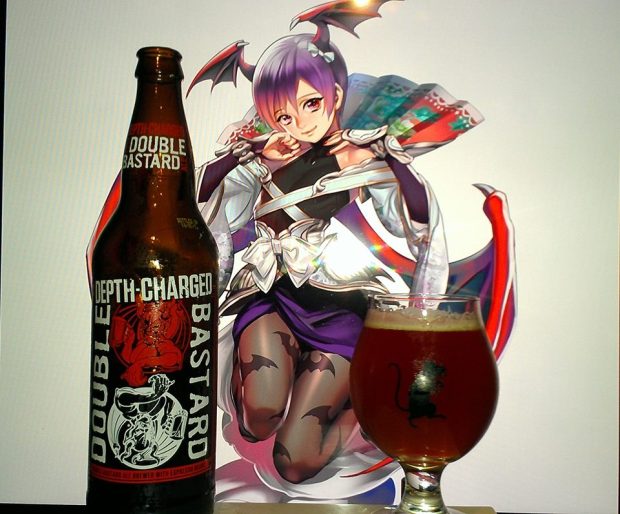 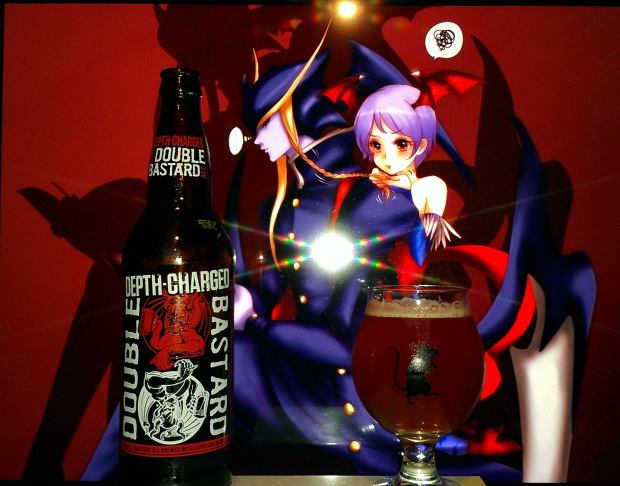 Label:
So, your knowledge of caffè is such that you’ve correctly determined that “depth-charged” refers to the addition of espresso-roasted coffee beans. Well, bully for you. For all I know, you picked that up hanging out at some coffee megachain amid a microcosmic mishmash of vapid layabouts, metro hipsters, and laptop-sporting exhibitionists trying to convince the world (and themselves) that they’re click-clacking out the great American-novel-cum-screenplay for a future summer blockbuster. I could surely teach you a thing or two were I inclined…which I’m NOT. Perhaps you’re eyeing my backside because you’re really into coffee. Nothing wrong there, but if you’ve come to me expecting some beery incarnation of your security blanket “me time” soyfrappélatte or similarly dainty concoction, you’re in for some grande-sized disappointment. I do not exist to provide a comforting mode of conveyance for your jittery, caffeinated fantasies. Nothing about me is smooth, subtle or built for comfort. Those who should be holding this bottle (en route to opening and indulging in what awaits within) are really into ME. Get your cinnamonmochaccino fix elsewhere. This here’s strictly for adult men and women who don’t require the culinary crutch of added fat and sweeteners. My motto: Bold and brave or not at all.

Got this one at my local shop. Luckily, I did not have to buy the whole 4 pack special as this one seem to come with in the Bastard Box which has 4 Arrogant Bastard variants. Double Bastard has been one of the best beers I have ever especially since the time I started doing beer reviews. Heck, I even had a dream I had it before I actually tried it. That’s how much I like this one. I even have one aging for several years. When I first heard that this was coming out and what it had I was like wuuutt? I wondered how it would work as the beer already is strong and citrucy but would it really meld with the coffee? Well, I guess we’re about to find out.

Overall:
Taking my original love of the bastard to an even newer level. Double Basted Charged with coffee is very exceptional. Who would of thought that a coffee blend to an already dream beer could go beyond something I would of ever thought possible. Just goes to show what Stone brewing is capable of. They are damn crazy with these beers. I highly recommend this one.

Anime Corner:
Lilith Aensland and Jedah from Darkstalkers/Vampire Saviour were used in this pairing as I wanted to bring back Lilith for the Double Bastards pairings since the first time I tried the beer. Since then I have done ones with the girl version of Jedah too. Both of them representing the Double in Double bastard. Now with the male version of Jedah, I wanted to show what the wording depth meant in terms of the art pairing. She literally comes out from the depths of Jedah’s charred heart. The other pairing with Lilith is just since I wanted a new artwork to pair with this great beer.

After 2 years, I was able to get this version on tap from Stone Directly. I have done the original review here:https://animebeers.com/2013/11/25/double-bastard-2013-release-by-stone-brewing/

This version definitely shines with richer more caramel and dark fruit complexities. Goes to show why Double Arrogant Bastard Ale is still number 1 amongst many beers in the industry. This time I chose Morrigan to go with Lilith instead of Jedah as you can see the development in “many” ways 😉 . Cheers! 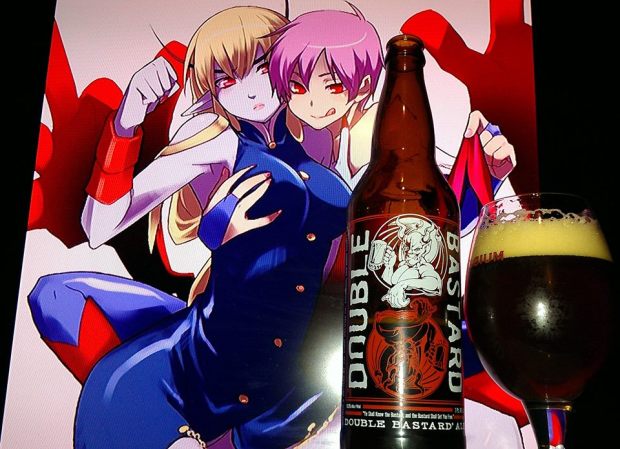 Label:
“Ye Shall Know the Bastard, and the Bastard shall Set you Free”

Double Bastard Ale
Warning: Double Bastard Ale is not to be wasted on the tentative or weak. Only the Worthy are invited, and then only at your own risk. If you have even a modicum of hesitation, DO NOT buy this bottle. Instead, leave it for a Worthy soul who has already matriculated to the sublime ecstasy of what those in the know refer to as “Liquid Arrogance.”

This is one lacerative muther of an ale. It is unequivocally certain that your feeble palate is grossly inadequate and thus undeserving of this liquid glory…and those around you would have little desire to listen to your resultant whimpering. Instead, you slackjawed gaping gobemouche, slink away to that pedestrian product that lures agog the great unwashed with the shiny happy imagery of its silly broadcast propaganda. You know, the one that offers no challenge, yet works very, very hard to imbue the foolhardy with the absurd notion that they are exercising ‘independent’ thought, or attempts to convey the perception it is in some way ‘authentic’ or ‘original.’ It’s that one that makes you feel safe and delectates you into basking in the warm, fuzzy, and befuddled glow of your own nescience. Why so many allow themselves to be led by the nose lacks plausible explanation. Perhaps you have been so lulled by the siren song of ignorance that you don’t even notice your white-knuckle grip on it. You feel bold and unique, but alas are nothing but sheep, willingly being herded to and fro. If you think you are being piqued in this text, it is nothing when compared to the insults we are all asked to swallow streaming forth from our televisions and computers. Truth be told, you are being coddled into believing you are special or unique by ethically challenged “pay no attention to the man behind the curtain” marketers who layer (upon layer) imagined attributes specifically engineered to lead you by the nose. Should you decide to abdicate your ability to make decisions for yourself, then you are perhaps deserving of the pabulum they serve. Double Bastard Ale calls out the garrulous caitiffs who perpetrate the aforementioned atrocities and demands retribution for their outrageously conniving, intentionally misleading, blatantly masturbatory and fallacious ad campaigns. We demand the unmitigated, transparent truth. We demand forthright honesty. We want justice! Call ‘em out and line ‘em up against the wall… NOW.

Countless times have I specified the greatness that is the true king of beers, the arrogant bastard. It was only but a dream back in 2011 when I first tried the Double Bastard for the first time. I detail the story in my previous review. Back in my beginnings of craft beer drinking days when my buddy Rich told me about The Arrogant bastard, when I first heard of this of the original I was amazed. When I found out there was a double, nothing could stop me from trying it and thanks to my friend chino, it came to be. From then on, the successor of kings was this one. I have tried this beer countless times and I always find myself every year trying it again. In fact, I am cellaring one since 2012. That is how much I liked it.

Aftertaste:
The aftertaste continues with orange, grapefruit, earthy hop bitterness with continued caramel, toffee and raisins. A sipper with no alcohol in the taste. The alcohol will hit you later don’t worry *Evil Grin*. It maintains the aggressiveness while still having a unique smoothness too it as well.

Overall:
Bar none, Exceptionally great beer and one of my top favorites. Even if available only seasonally, it is still readily available so it is possible a lot of places in the United states now carry this magnificent piece of craftsmanship. The successor of the crown of the king of beers. No doubt you will always get a recommend from me on this one. The beers I can almost compare this too is also Surly Seviin, except not as hoppy. Stone Old Guardian is close but not as orange and grapefruit forward.

Anime Corner:
Lilith Aensland and Jedah Dohma. Lilith, the one with wings and Jedah the blond one. Long ago I used this picture for the first review because I wanted to explain double bastard as 2 separate entities. Sweet and Bitter. Sweet Lilith with the bat wings is a representative of the gargoyle of the label while emphasizing the sweetness trying to take over and soften up the arrogance which is Jedah. The bitter and dark Jedah which, while evil and super arrogant inside, has now transformed (due to Demitri’s Midnight Bliss) into a much sweeter, yet a bit bitter, delicate flower. Keep in mind, it seems, the tables have turned as Lilith with her sweet cunningness has now engulfed the frail Jedah into her own version of the dream that is now this beer, The Double Bastard. Even if she has to tear the layers of flavor, she will find the balance needed in this great beer. 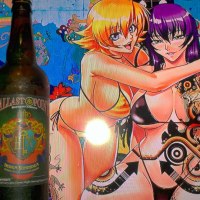 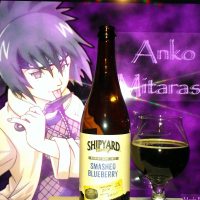