Label:
1933 to 2013
It’s Rogue Creamery’s year for a Pearls and Diamond celebration, and Rogue Ales has handcrafted ale to honor their commitment to sustainability and creating award winning cheese.

Brewed and Bottled by Rogue Ales Newport, OR 97365

What can I say, I have never tried this beer but just the idea of trying a Rogue Anniversary beer, well, Rogue Creamery’s anniversary beer, I was like, fuck yeah. By the way, while Rogue Ales and Rogue creamery share the same name, they are indeed unique entities and to pay tribute to one another, this awesome beer was born in collaboration.

Overall:
Freaking perfect! I tried this with a piece of Munster cheese and it was damn good it really solidified the caramel aspects of the beer. You don’t need to try it with a cheese but just by itself it is very delicious. Taste more along the lines of a German Doppelbock or a winter warmer. It is very delicious regardless and I definitely think fits the Rogue creamery’s honor. Now, I should go online and buy some of their cheeses as they seem very delicious! Definitely give this one a try, I was rather intrigued by the sweet flavors this brown ale had to offer.

Anime Corner:
Original artwork by Kuromiya was chosen in this pairing to represent the delicous lactic flavors of the beer and to pair with the colors of the bottle and label. The character’s blue hair (maybe blue cheese) and flan pair with the colors. The flavors are obvious in this as it is a beer about a creamery and creameries sell puddings and sweet vanilla desserts. The pudding she is eating and her dress colors represent some of the prime flavors of the beer such as the vanilla, cherry, flan, chocolate, brown sugar, cinnamon and so forth. I can go on and say she the ribbon is like a cows horns and her breast combined with the pink dress represent the cow’s utt…oh… well sure why not 😉 . Whatever you say man. Anyways, I am sure there are other sweet things that can be said about this pairing. Oh yeah and the purple things, dark fruits! 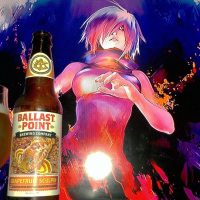 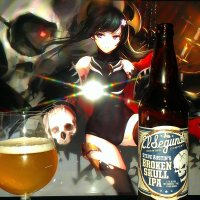