Commercial Description:
A new beer from Unibroue born of the friendship between its Brewmaster Jerry Vietz and Dave Mustaine, legendary lead vocalist and founder of heavy metal group Megadeth, is officially launching today in the U.S. and Quebec. Named À TOUT LE MONDE as a nod to one of the band’s songs and one of their biggest hits in Quebec, this beer recalls the consonance of Unibroue’s flagship beer, La Fin du Monde.

Dave Mustaine became friends with Jerry Vietz during Megadeth tours in Quebec. During their time together, Dave and Jerry created À TOUT LE MONDE as a symbol of their friendship. “At Unibroue, we appreciate flavour – and we know Megadeth is anything but boring,” explains Jerry Vietz, Brewmaster at Unibroue. “To Megadeth’s delight and that of their fans and connoisseurs, we’re offering an uncompromising beer with rich hoppy aromas, created according to Dave’s personal tastes.”

“Our shared passion for excellence produced a one-of-a-kind saison beer,” added Dave Mustaine, Megadeth’s lead vocalist and founder. “I’m thrilled to present this new beer to my fans, and everyone who loves good beers with character.”

À TOUT LE MONDE ale is a flavorful Belgian style dry hopped golden saison with hoppy and spicy notes. Topped by an unctuous head, this beer will give fans a clean, fresh taste and a crisp dry finish inviting to take another sip.

À Tout Le Monde or “For all the world or everyone” is inspired by the actual song in MegaDeth’s 1994 album, Youthanasia. This is the first time MegaDeth joins the craft beer scene after several awesome bands like AC/DC, Iron Maiden and many others worked to release their own brews. This choice to release something light was chosen as it would appeal to the massed. Basically something you can drink a lot of and still enjoy. It seems like a great choice and now that the beer is here on the site, let’s see what this awesome stuff is about. Cheers!

Overall:
A very good saison that has many of the awesome flavors you would find from many of the great saisons out there. While I think it does not bring anything new that I haven’t had before, this one is still awesome and delicious. I would definitely say this one is a good gateway representative and definitely something many people will enjoy, especially since it is Megadeth after all. Find this one, especially if you are a fan. 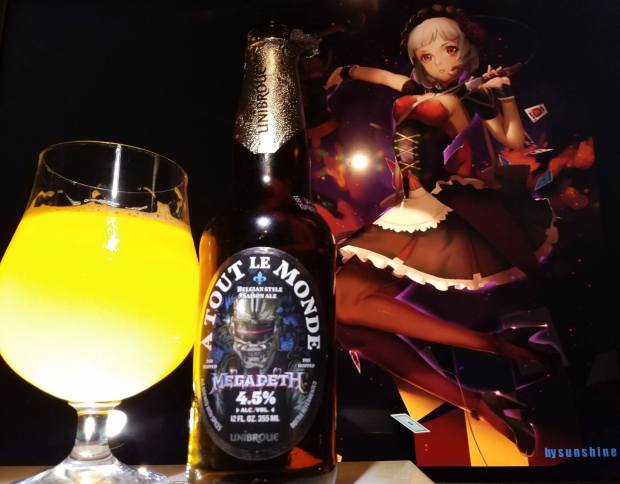 Anime Corner:
Sakuya Izayoi from Touhou Project and Vic Rattlehead from Megadeath were used in this pairing as I was definitely trying to search for Megadeth and anime. Long behold, I found these to be tagged with Megadeth on them. First, since Vic is in the label and second, Sakuya relates to it as she has the guitar and she stands in front of the lyrics “Never Walk Alone” and “Call to Arms”.