Another year has come to the release of the awesome and ultimate Beer Geek Beer, the W00tstout. This beer has been a beer I always look forward to every year in which I compare the previous year to the current release. While I really love this one, I am not sure how long I will keep doing these double reviews but one thing is for sure, I will be doing a special review when I end up brewing the recipe myself. I actually got a hold of the recipe and may create my own version of W00stout. Anyways, I have last year’s version which is the 2.0 combined with the 1.0 recipe. This year’s version is a take back to the first recipe, the W00tstout 1.0 which is released as 4.0. These beers are readily available for a limited time. So let’s take a look at the newest release and see how it stands to the previous year. Cheers! 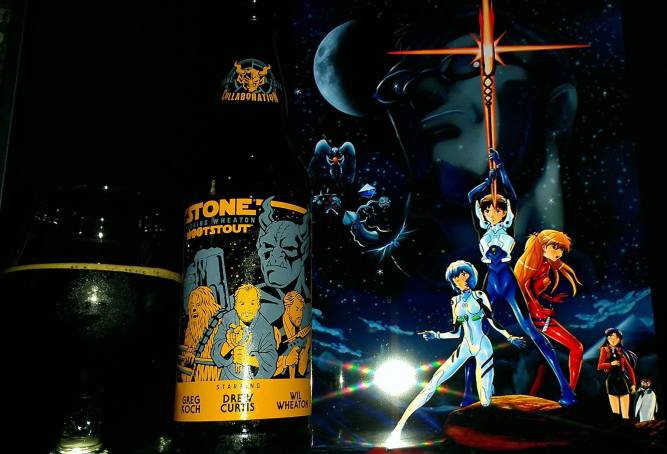 Label:
Has it been three years since we introduced the world to w00tStout? about a dozen years ago, I had the pleasure of getting to know Wil Wheaton when he reached out as a fan of our beers. Over the years, we kept plotting to brew a beer, and it finally came together in 2013. We brought mutual friend Drew Curtis (founder of fark.com) aboard to round out a three-way collaboration. The imperial stout you’re holding contains wheat (Wil pretty much insisted and we paid tribute to Drew’s Kentucky roots by adding pecans to the mix and partially aging the beer in bourbon barrels. The result? Nothing short of serendipitous. This is release No. 4 of our decadent staple of Hop-Con, our annual July celebration of all things geeky, and goes back to the original recipe and process we started with in 2013.

We were honored to work with Amanda Conner, who lent her illustrative talents for the creation of this year’s w00tstout art in exchange for our donation to The Hero Initiative (heroinitiative.org), a charity organization that provides retirement funds for golden-age comic book artists. She’s worked on countless comics and characters over the years, including Gargoyles, Vampirella, Power Girl, Silk Spectre, and Harley Quinn. She’s also co-creator of Gatecrasher and had her art recently featured on The Big Bang Theory. We also had the honor of working with her husband, Jimmy Palmiotti, who helped with the creative process. He’s known for so many things that you either know him or or a quick web search will give you far more insight than could fit on this bottle.

“This beer ages well. Cellar yours and in the smuggling compartment of a Corellian YT-1300 light freighter-or suitable cool and dark space in space. Pull it out to share on Life day with family or friends, either at the feast table or under the Tree of Life.
GREG KOCH, Stone Brewing CEO & Co Founder

“For When you absolutely, positively, must go to the Dark Side, this is a good stand-in”
DREW CURTIS, Fark.com Creator & Patent Troll Killer

“Hokey marketing and ancient fizzy beers are no match for a good w00tstout by your side”
WIL WHEATON, Actor & Web Celeb

Overall:
The new edition is essentially the original. Supremely decadent and amazing as ever. While being mildly boozy, this one is one that is probably better aged but even as is, it never ceases to amaze me. With the rich dessert flavors of a Stout with quad notes and banana sundae goodness, it has inspired me to make it on my own. Not only for the ultimate beer geek and fan of Star Wars but for those that love strong dark stouts too. As every year, supremely and highly recommended. 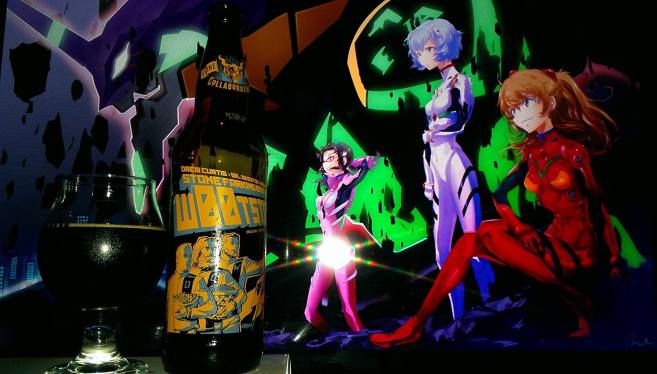 Label:
Wil Wheaton first called us in 2004 ask if it’d be OK for him to put the Arrogant Bastard logo on his blog’s website (back when people still asked permission to do such things), and I just so happened to answer the phone (back when I still answered the main line sometimes). Since he was so damn enthusiastic about our beers, I said ‘Sure, no problem,’ all the while thinking ‘Hmmm…this guy’s name sounds familiar.’

Months later, in a serendipitous turn of fate, I reached out to our 10,000th email newsletter subscriber…drumroll…Wil Wheaton. Since his gigs in the iconic Stand By Me and Star Trek: The Next Generation, Wil has become quite the renaissance man, adding author, w00tstock innovator, and homebrewer to his resume. His enthusiasm for the fermentable arts and our beer was such that after many occasions of sharing grog over the years, we decided it was time to brew in collaboration.

It was a no-brainer for us to choose Drew Curtis—who many know as the twisted mind behind Fark.com—as our third cohort. Drew was an old friend of Wil’s that I had serendipitously met (when he saw me and told me, ‘Dude, I love your beer) and enjoyed many beers with at the famous TED conference three years in a row. The beer you hold before you is an imperial stout made with wheat (Wil pretty much insisted), and we also paid tribute to Drew’s Kentucky roots by adding rye and pecans to the mix and partially aging the beer in bourbon barrels. The result? Nothing short of serendipitous.”

In celebration of the third brewing of this annual offering, we added to the mix a version of last year’s vintage that we aged in bourbon barrels for a year. Consider it a superhero version of this sudsy staple of Hop-Con, our imaginary titled annual July W00tstout release event!

Brought in to put a personalized stamp on this year’s edition of w00tstout was famed comic-book cover artist Dave “The Reverend” Johnson. The Elsner Award winner, known for his work for DC Comics and Vertigo series “100 Bullets.” created the fine art for this bottle in exchange for out donation to The Hero Initiative (heroinitiative.org), a charity organization that provides retirement funds for golden-age comic book artists.

Overall:
Awesome Dark fruit sauce! The Cuvee of 2.0 and 1.0 make for one beer that is essentially more dark fruit forward that it was when I first had it. I expected no less from this one but damn, there was just so much deliciousness I was not ready for. Belgian stout/quad and chocolate notes to the umpteenth power. The fact that the booze dissipated too also gave way to a much greater complexity. Just like I have done several times, saving a couple of bottles for aging is definitely worth it and I recommend you do the same.

Anime Corner:
Mari Illustrious, Rei Ayanami and Asuka Sohryu Langley/Shikinami from Neon Genesis Evangelion were used in this year’s pairing of 2016 W00tstout and 2015 W00tstout. Just like the last several year, I wanted to represent the 3 collaborators Wil Wheaton, Drew Curtis. Greg being Asuka from the original Mari being  Wil and Drew is Rei. In this Star Wars version of the beer I wanted to pay tribute with some crossover Evangelion artwork where Shinji’ Ikari’s dad is the the Gargoyle. Yes the characters seem to be mixed around but they are still characters for the original brew pairings. It has been along time coming with these awesome Geek beers and hope more to come. Great Job and Cheers to all Sci-Fi, Anime and Beer fans out there!