Before the meaning of the name is revealed for that “ah-ha” moment, we must elaborate on the significance of the collaboration. Three key Stone brewers gathered together with long-time friend and Lost Abbey brewmaster Tomme Arthur in Berlin. There they collaborated on a beer representative of our presence in Germany and the craft beer crusade we have been on and never lost sight of despite all of the words of criticism. Too aggressive, too many hops, too expensive, too impossible to break into centuries of German tradition…all of that was just words. It didn’t break us. And here we are, two decades later with a foothold in Berlin and our fingertips on the international craft beer moment. In honor of that we brewed a dark imperial lager with a German yeast strain and partially aged it with wooden chips “sticks” in stone granite barrels. Ah-ha.

Tasting Notes:
An explosion of Dark toast followed by oaky vanilla and clove. Crisp and earthy.

Aroma:
Roast earthy and sweet oak, aromatics as a handful of Black Forest

Our dream to be the first American craft brewery to independently build, own and operate a brewery in Europe has become a reality. Located in a historic 1901 building, our state of the art brewhouse and destination restaurant in the Mariendorf neighborhood is a true thing of beauty! As promised, we invited some of our best friends in craft brewing to create an exceptional series of celebratory beers. We hope you enjoy the international camaraderie that went into making these fourteen truly groundbreaking collaborations!

In 2014, Stone was raising money to open a brewery in Berlin, Germany. It would be the first time an American craft brewery would open up a business in Europe. For Germany who has Bavarian laws on the beer making process, craft beer would no coincide with their laws. However, Stone being some crazy arrogant bastards were able to make their way into the market and were successful to open up shop. At the time, I had donated money on promised collaborations with different breweries. Mainly some of the ones I like such as Brew Dog, Lost Abbey, The Bruery, Surly and even Devil’s Gate/Will Wheaton. So, with the donations I made in that year, I was wondering if I would ever see a return on my investment. Long behold, Stone contacted me to inform that they were going to release the beers and so today I bring Sticks N’ Stones.

A Lost Abbey Collaboration? What? Lost Abbey has been a brewery that got me into the artwork of beer labels and was there in the beginning of my craft beer adventures but so was Stone. The fact that they collaborated, which I believe is a first, is simply awesome. So when I first heard they were in on the Stone Berlin Project, I had to get this beer and bring it to the site. While I did not know what they would brew together, I was surprised it was a Dark Imperial Pilsner. It does seem like a rare style but also I had my slight doubts. This was only because pilsners, while very delicious, don’t always appeal to the esoteric beer drinkers so I was wondering if this would actually work. To my surprised, it was very good when I had a sample of it when I visited Stone Pasadena to get my bottle. Here’s the breakdown, cheers!

Overall:
A supremely exceptional pilsner. Even though to be honest, its more like a German Doppelbock but that’s the best part. I love Doppelbocks as they always have the dark fruit flavors. This oak imperial dark pilsner is very similar and with the oak whatever process they did to make it taste kind of like Neapolitan was what I definitely loved from this one. Very complex and well worth waiting several years for. Highly recommended if you can get this one!

Anime Corner:
Neopolitan from RWBY was used in this pairing since that was the flavor I essentially got when I first had this beer off the tap when picking up the stone collab, Neapolitan Ice cream! The name Stick N Stones is reminiscent of the quote “sticks n stones may break my bones but names will never hurt me”. For this pairing, that is why I got Neo with a skull, in relations to bones. In addition, Neo is deaf she she cannot really say anything to the effect of names to make fun of any one. I realized this pairing wen’t beyond just the flavor profile, so Neo was perfect for this. 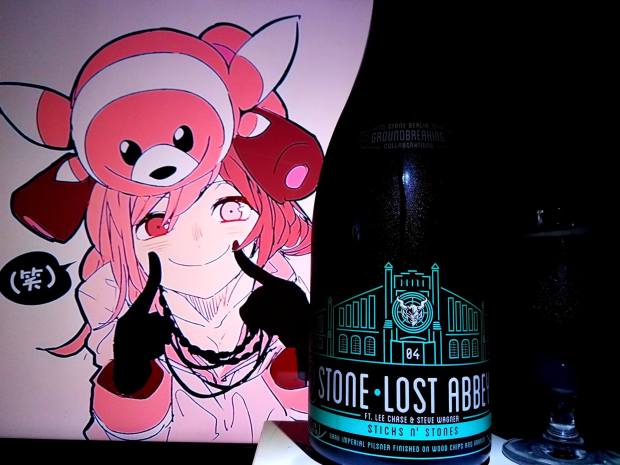