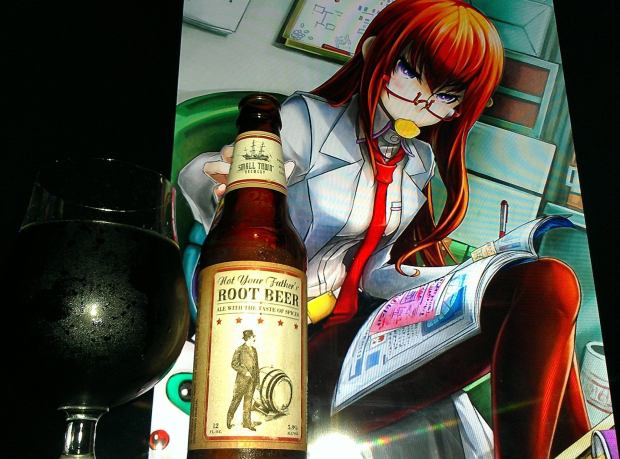 Not Your Father’s Root Beer by Small Town brewery is a 5.9% ABV Alcoholic Root Beer brewed with spices.

Label:
Unique Ingredients with an unmistakeable taste of nostalgia

Introduced to me by my friend Jorge Silva, I have only heard slightly about this beer but I heard a lot of talk about this one. A beer that is is actually an alcoholic root beer. As amazing as it sounds, I did not know what to think of it of course. Especially since it passes off as brewery even though it is owned by Pabst brewing. Either way, I want to see what exactly this was so when I first tried it at my friends house, it was, very good actually. You really could not tell it was anything other than root beer really. Now that I bought my own 6 pack, I will try and figure this one out. Let’s have a go at it. Cheers!

Aftertaste:
Vanilla, Rootbeer flavors, licorice, dark fruit notes, whiskey notes and molasses linger. No alcohol in the taste, crimson dark brown clear body, smooth, silky, velvety and creamy mouthfeel with an impossibly easy to drink as it does not taste like beer but root beer.

Overall:
A perfect alcoholic root beer. It is really indistinguishable from just a regular Root beer soda. While I could not get very complex with this one since what they were aiming with this ale, they nailed it very head on. It is impossible to find the alcohol but this is also dangerous as you will get drunk off a six pack of this. Good Game ol chaps at Small Town, Good Game! Highly recommended if you love root beer, you will love this ale.

Anime Corner:
Kurisu Makise from the Steins Gate series was used in this pairing simply as the way the beer was introduced to me. Synonymous with the famous Dr. Pepper, this is way better, but since I wanted to find an art piece that shows someone giving you a root beer, I did this pairing which I actually liked how this turned out. She’s giving you some real rootbeer alright yum yum! (Not the Dr. Pepper ofcourse)