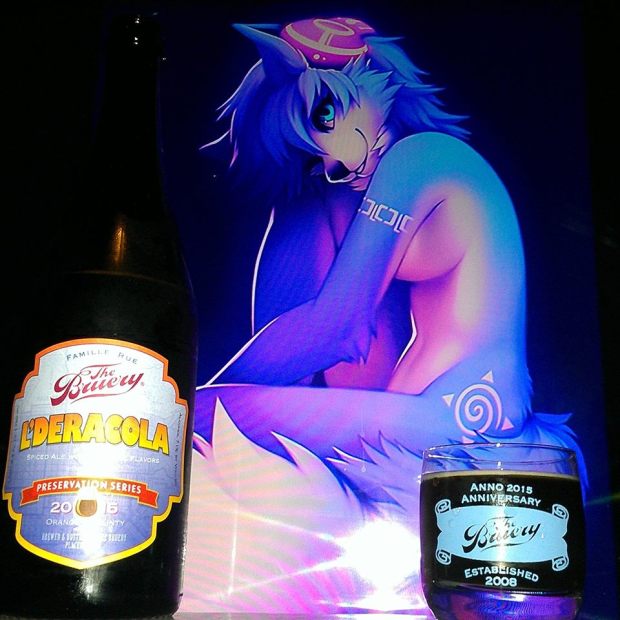 2015 Preservation Series: L’Deracola by The Bruery is a 7.1% ABV American Brown Ale brewed with Spices and natural flavors.

Whether you’re looking for a L’deracola or a Large Farva, you better pull over right meow because you’re in for a real treat. This dark ale was brewed with an assortment of spices meant to mimic the flavors of an ice cold cola. Best enjoyed right meow for peal flavor. Please store in a cool, dry, place. The ideal service temperatrue is 45°F (7°C). Best served in a tulip or Wine glass. Meow

Commercial Description:
L’deracola is a beer inspired by another favorite drink of ours that probably shouldn’t be such a favorite… cola! To create this unique beer we had to dive through the overwhelming layer of saccharine that dominates the flavor of most colas and discover the subtle flavors that create the world’s most popular soft drink. Around a dozen different spices were added to a dark malt base and it was finished off with a twist of lime for good measure. The resulting beer has all of the flavors of an ice cold cola, without the overwhelming sweetness. Delightfully refreshing on it’s own, but also ideal for a modern take on a classic style cocktail.

The Cat’s Meow is out of the bag. Or in this case, the fox! I will tell you why later. This is the 2015 L’deracola presented to members of the Bruery’s societies especially the Preservation and Reserve as well as Hoarders. This has seen public release in bottles and even have growler fills of this at the brewery to the public, limited time only. So in their crazy experimentation, never would I have imagined that they would come up with beer that is so close to the flavors of Cola that it truly is one of the most unique beers I have ever seen. With great excitement, and a pleasure, it is with great craze that I bring forth, the “Cola Beer” here to the site and the first of its kind. Cheers!

Overall:
A true testament to what they set out to do, make a beer taste like cola. Yes the sweetness is subdued but all the right spices that make cola are in this beer which is really crazy! The hardest part about reviewing this beer is trying to find all the intricacies of it. It really is not the most complex but just the fact that they got it right, a true Coca Cola beer, that is enough for perfection in my book. Many like this one, others might not like the spices used in this but yea if you are a cola fanatic, you have to try this one! Cheers!

Anime Corner:
Krystal Fox from Star Fox was used in this pairing as I wanted to pair her with a great Bruery beer and the colors were a perfect complement for this one. The whole cats meow is in reference to the excellence of it but also the cat’s pijamas. Not sure how to compare that to the beer and Krystal but she certainly does look cuddly and cute like those pin up girls they used to advertise with coca cola. Even though the colors seem more like RC Cola or even Pepsi Cola. Either way, This beer will make you feel like you are a cat and drinking a bottle of pure catnip. Cheers!