Label:
This beer is from our collection of special variations that live in our Dragon’s Milk cellar. Local raspberries were added to the barrels in the final stages of conditioning. Raspberries lend depth, brightness and unique fruit character that harmonizes beautifully with Dragon’s Milk dark, roasty tones of malt, bourbon and oak.

The original Dragon’s Milk was a beer I enjoyed back in 2011 when I was able to beer trade. This brew is a variant of the original Dragon’s Milk and was pretty hard to get upon released. I was able to get this one from www.mybeercellar.com. Since this beer was an in-store released, you literally had to be from Michigan and get it at the local stores in the Midwest to find this one. I don’t know if they will ever brew this one again but the opportunity to bring this to the site was something I could not pass up. So let’s prepare the swords and take on the dragon to get the milk shall we? Cheers!

Overall:
The original Dragon’s milk was something that was unforgettable. Bringing this one back after several years and with raspberries brings a nostalgic time from 2011 when I first started trying different brews all the time. Now with the raspberries in there, the dynamic of the beer has taken a more sweeter frutier approach with milky chocolate notes of the original and bourbon. After trying this one, while it is not super strong on the bourbon category, the complexity it uses to still carry sweet flavors is what makes this one exceptional and exceeding my expectations. This one is definitely on par with the sweetest raspberry beers out there, yes I am looking at you Big Lushious. I highly recommend this if you love dragons. The original was great magic potion, the Dragon’s Milk beer barrel bourbon was delicious.. nor surprise why the raspberries just take it to another level.

Anime Corner:
Sierra from the Legend of Mana has returned from the original pairing I did on Dragon’s Milk back in the day. Sierra is a dragoon who’s animal origin is unknown but mainly resembles the furry dragons of the Never Ending Story with the canine like appearance. It would not surprise me if she is a dragon in reality which honestly I wouldn’t doubt or a dragon hybrid. The reason I also chose her in return has to do with her raspberry color hair blooming in the wind. This pairs extremely well with the raspberry aspects of the beer. Since Sierra is like a ninja in the wind when it comes to fighting, it may be of no surprise why her appearance as as cute yet extremely deadly ninja goes extremely well with how well the beer drinks despite the ABV. Trust me, she gets you good as you try to take her on further and further. She will always bee the Dragon that gives the Dragon’s milk. Yes the original Dragon’s milk kinda depicts where the milk part comes from 😉 . 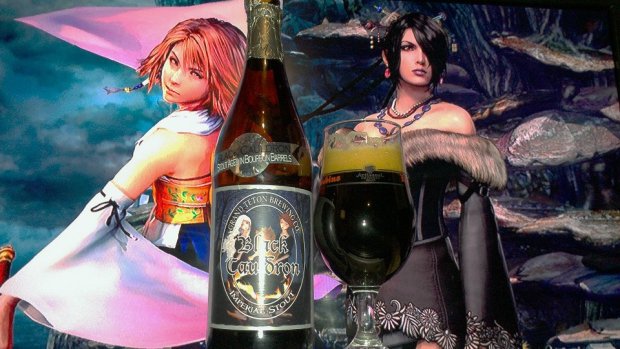 This is part of a rare release of brewers’ series beers that may be available soon. The beer has no particular description noted. I have tried the regular version of this beer in the past and have considered it a favorite. With a release of a barrel aged version, it brings forth something even more magical, mystical, dark and well, just delicious.

The aromas of this beer come off as a semi sweet semi bitter bakers chocolate, coffee, mocha, vanilla, some bourbon, oak, dark fruits and berries. The taste reminds me of the Oak Aged Chocolate Yeti with bourbon. It is pretty good. Like a Dark and semi sweet/bitter bakers chocolate and coffee cake dipped in a little bit of bourbon with notes of wooden oak barrel, caramel, vanilla, blackberries, raisins, cherries, sweet bread, minor earthy hop bitterness with disappears into some coconut like notes but just a little bit. It is quite smooth and rich going down. It is not super boozy but you get some nice notes of the oak and the bourbon. It is not like the Old Rasputin Barrel Aged but it is still a great barrel aged stout. Remembering how good the original was for me, this is a great step up in complexity and a must find.