Aloha B’ak’tun by Maui brewing is a 7%ABV Belgian Stout brewed with chocolate, cinnamon and chipotle.

Label:
Change is the only constant in life; and this year has been marked with exiting changes. Staff moving on, new staff joining our team and construction plans for the new brewery (Yes, still on Maui). Our final limited release of the year celebrates change and bids aloha to our friends new and old.

This Belgian stout is brewed with chocolate, cinnamon, and chipotle. It pours deep black with ruby highlights. Layered with roasted malt character hints of bittersweet dark chocolate, clove, cinnamon and subtle peppery notes in the nose.

The year is ending, the world is not. Raise your hand and toast with us to all the great things to come. Look forward to four new limited releases in 2013.
Mahalo Nui Loa.

Belgian Stouts are some of my favorites. So when I found this one I had to get it. The fragrances are are roasted coffee, bakers and dark chocolate, bready notes, raisins, slight peppercorns, mild pepper, tobacco, molasses and slight caramel. The flavors are mainly of coffee, dark chocolate, slight tobacco, smokey (in the glass), dulce de leche caramel (mainly when in the can), bready notes, raisins, slight chocolate covered cherries, slight peppery notes of chipotle but hardly enough to detect heat at all. I tried it both out of the glass and the can. Frankly, it taste better out of the can than in the glass. I guess like heady topper, certain things taste better when out of certain containers. Although after letting it sit for a while in the glass, the flavors like that of the can were there. All and all, an awesome beer, very good Belgian stout but kind of not as full flavor impacting like Thirteenth Hour or Buffalo Stout. Still, great pick up and one I would try again 🙂 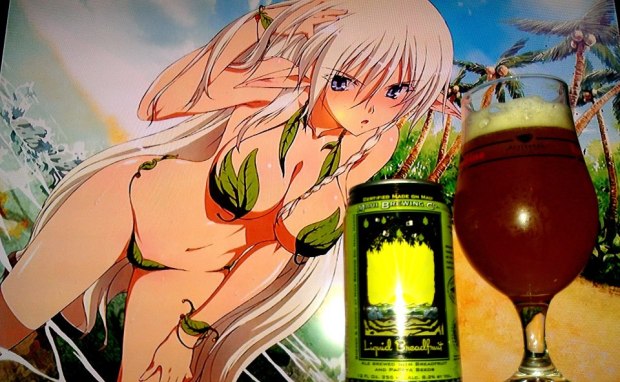 Liquid Breadfruit collaboration by Dogfish Head and Maui Brewing is a 8.2% ABV ale brewed with breadfruit and papaya seeds.

Millions of Delaware natives lusting fro tropic climes cannot be wrong. We isolated a unique yeast strain on a peach farm near dogfish head brewery. We mapped its DNA, brewed with it, and instantly fell in love with the fruity aromatics the yeast threw down. It immediately reminded me of Hawaii and Hawaii immediately reminded me of my pal Garrett at Maui Brewing Co. A collaborative brew seemed like a fun way to use this tropical yeast. – Sam.

Breadfruit has been a staple crop f0r 3000 years. It’s very versatile and extremely tasty. My buddy Sam and I thought it’d be fun to brew with. Why not push the limits of beer a bit further? After all, beer has been called “liquid bread” for centuries, right? So liquid breadfruit’s time has come – Garrett.

I’m down with the idea of adding Hawaii’s native breadfruit into the mix. To amplify the tropic thunderstorm that’s brewing in the recipe let’s hop this puppy with calypso hops which throw a lot of pear and apple notes adding bitterness and aroma – SAM

Sounds great, Let’s use some toasted papaya seeds, it’s a great spice to balance the breadfruit and compliment the fruitiness of Calypso hops and tropical notes lent by the philandering Delawarians, it was no small task to harvest all these seeds and fruit by hand…. But it sure beats chewing purple corn for weeks on end… -Garrett

I have had papaya before and to be honest it is a bit of an off fruit. A bit pungent lol. I can smell alittle bit of it in this beer bit what really comes out is some peach, mango, orange, bready grains, some what floral like a saison with a bit of botanical notes. The flavors are of that, papaya, mango, orange, peach, pear, some apple cider, sweet biscuits, caramel, bit of coconut and some peppercorns like that of Allagash Fluxus. I have never had bread fruit but this is pretty tropical type of beer. So I would think it definitely goes along with those tropical fruits I tried before. I would almost say that this also feels like a Tropical Tripel for those that love Belgian beers. Pretty awesome beer in a can :P. 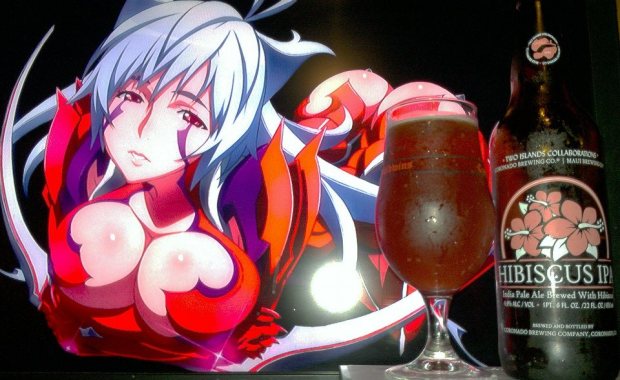 Hibiscus IPA Two Islands collaboration by Coronado and Maui is a 4.9% ABV India Pale Ale brewed with Hibiscus flowers. Many of us Latinos know this flower as it is used to make Jamaica (Iced Hibiscus-Tea). Never had such a mix before. However, now the tropical flavors are probably more potent in this IPA

CBC and our fellow islanders at Maui Brewing Co are bridging the distance from Hawaii to the mainland with big flavor, camaraderie, and generosity. This centennial, chinook, and nugget-stoked IPA, made floral with the addition of hibiscus flower, is the first of an annual series of collaborative beers benefiting local charities. This time around, a donation will be made to Beer for Boobs, a Susan G Komen 3-day team formed by San Diego company White Labs, who contributed the yeast for this brew. No matter which side of the Pacific you’re on, there’s no better reason to ” Drink Pink!”
—

When pouring this beer, it was mainly crimson and pink. The beer aromas of the pine and grassy hops are there but the floral and fruity aromas are also there. Almost like cherries. First sip of this beer and I was amazed by a different type of bitterness. I have had Jamaica on many occasions, with and with out sugars. So the flowery bitterness is there but it works very will with the hops creating a hoppy and floral bitterness hybrid. The flavors are of grapefruit, pineapple, cranberry tart, light cherries, orange, biscuit bread and lime. The flavors are not too overwhelming making this a pretty refreshing beer which wont fill you up to quick but has enough flavors to make it interesting. Even though it does not a super bitter IPA role, it plays it role for which it is suited for, a tropical, floral and a bit fruity IPA.