Label:
Aventinus has been known to be the most intense and complex wheat-doppelbock in the world. This was the case for the past , but not anymore… Recently, Hans-Peter Drexler, brewmaster at G. Schneider & Sohn, heard stories about some extra special Aventinus resulting from partial freezing during a cold winter transport in the 1930’s . He decided to recreate this classic “mistake” to further concentrate Aventinus in a modern controlled facility. Thus, The Aventinus-Eisbock was reborn, Prost!
___

Considered the 3rd best Eisbocks in the World. Dunkelweizen styles is one of my favorites from Germany but they take this one to another level by freezing a portion of the beer and removing the water then adding it back to the base beer creating something super complex. This style is something I have never really tried and am damn curious to try and review here at brewerianimelogs. This beer is readily available world wide in many import craft beer sections. Cheers!

Aftertaste:
Banana, clove spice, wheat bread, dulce de leche caramel, dark fruits and earthy notes linger. Partial alcohol in the taste but not detracting from the flavors despite the fact that it is 12% ABV. A sipping beer, syrupy mouthfeel, brown, yellow an pitch black full body.

Overall:
This is is one of the finest ultra dunkelweizens on steroids I have ever had. This beer is definitely right next to the Belgian Quads in flavor but the unique Bavarian style definitely differentiates it completely from the Belgians. The banana notes and dark fruits are much stronger with this one almost to the point of no return. At 12%, I really love this beer and highly recommend you getting a bottle for sure!

Anime Corner:
Melissa from Knights in the Nightmare was used in this pairing to mainly pair with the aspects of label colors as well as the strength of the ABV. The armor she wears represents the ancient Bavarian style which has survived for many centuries and still alive in the German beer world. Melissa’s colors pairs with the dark complex flavors of the beer as well. The Angel likes wings represent how this beer is just as good as what the heavenly Belgian monastery’s can offer. 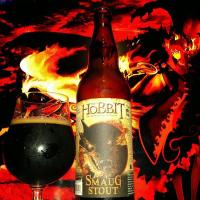 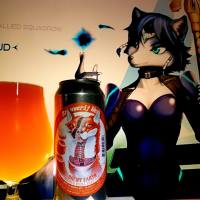 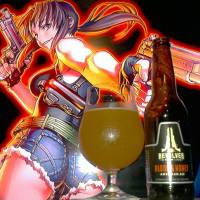