Description:
Is there anything more iconic of the lush tropics than the coconut? The delicious heart of this island treasure has a nutty, toffee flavor and aroma that sends you straight to the beaches of Paradise. Kick back with a Koko Brown, brewed with real toasted coconut, and savor the mahogany color and smooth, roasty malt taste. Available Winter/Spring Koko Brown pairs well with coconut and caramel flavors, such as Thai curries, BBQ meats and carne asada. Its refreshing nutty aroma makes for the perfect beer after a day on the water.
___

The first time I had this beer was at my friend Chino’s house. We were trying different beers and our friend Johan brought a 12 pack of Kona Brewing beers. I had to get this one again as this one made the most impression on me. As I remember the beer, there was a lot of coconut and coffee flavors but also vanilla and caramel which are essentials in some of the notes found in some of my favorite Barrel Aged beers. So I am doing an actual review now to break it down.

The aromas of this beer are of toasted coconut, caramel, hints of vanilla, slight hazelnut, brown sugar and coffee. The flavors are of toasted coconut, roasted coffee, slight caramel, vanilla cream, brown sugar, hazelnut notes, maple syrup notes and buttered toast. The drinkability is good. It goes down smooth with not any one flavor too overwhelming. It is a lighter beer yet the flavors are very reminiscent of a nice barrel aged beer although it is only flavors and not intensity. Meaning if you are looking into seeing some of the types of flavors you may find in bourbon barrel aged beers but are relatively new to craft beer, this is a good gateway intro. Like I said, before I was pretty surprised by this one and enjoyed it more than I thought I would have 🙂 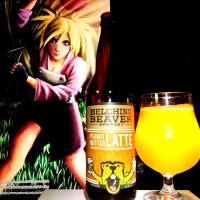