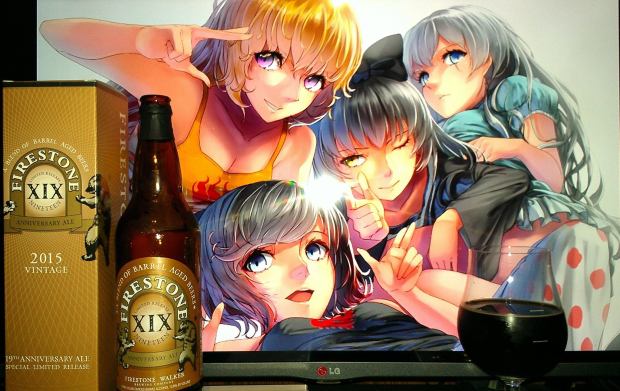 Description: (Please Click On The Strategy Guide/Letter From Firestone Walker and the Box) 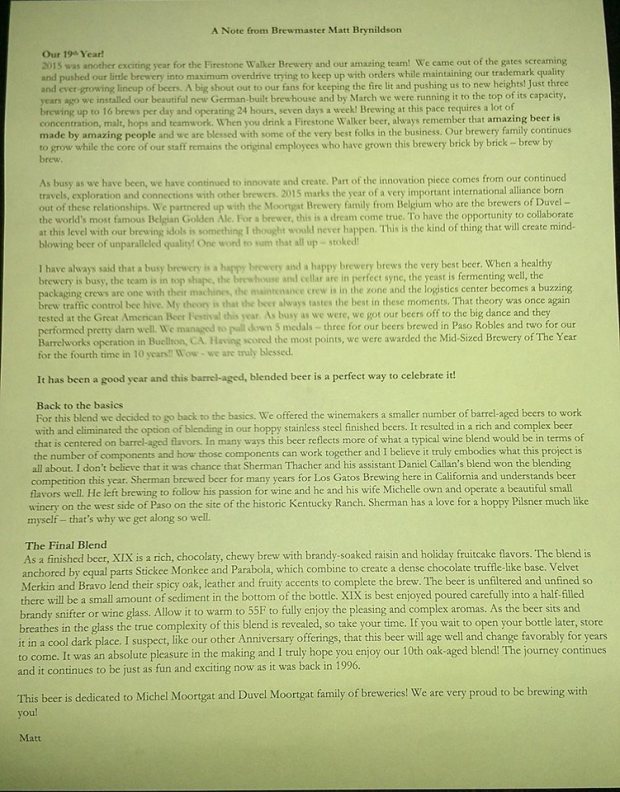 Another awesome entry in the list of Firestone Anniversary beers. These beers have been very massive Cuvees mixing in several notable entries in their list of awesome beers. Usually a mix of more than 6 beers would go into one and trying to figure it out would be like a crazy strategy game. This year however, they only mixed in 4 brews. While still awesome, I wonder how taking a step back may improve the perception of the taste in this one. The brew will either be as complex as the others before it or it will be just as close as the fusion may have given rise to newer flavors. Only one way to find out.

Overall:
Extremely exceptional! Even though they used only a composition of their best 4 beers, this turned out to be very complex still. While the craziness to dissect isn’t as crazy as their other beers and to see what flavors came from what and so forth, this one expands on the bit of complexity each brings and well, goes insane. Doesn’t make much sense right? But that’s essentially how I see it. Either each flavor is enhanced as it complements like flavors but also some flavors may have changed with the fusion. As a result, even at its coldest it will evolve to other flavors as it warms up. Just another delicious find you should look for.

Anime Corner:
Ruby Rose, Yang XiaoLong, Weisse Schnee and Blake Belladonna from RWBY were used in this pairing as I wanted to represent the 4 beers that were used to make up this beer, Parabola=Ruby, Stickee Monkee=Yang, Velvet Merkin=Weisse and Bravo=Blake. Ruby is Parabola as she is the leader of the bunch but also the name is like the shape of her scythe. Yang is the Stickee Monkee as she, like monks and shaolin monks alike, is versed in the inner strength and martial arts. Weisse is Velvet Merkin as she uses swords and magic to summon. Blake is Bravo like Brave and Courage as she is shy but can be very passionate about what she does. Altogether, make the team that is this beer,