The impact of homebrewers on the American craft beer industry has been immense. The comfort level and lack of inhibitors provided by a domestic brewing environment fosters a near limitless brand of experimentation, allowing homebrewers to push te beer envelope to its breaking point. Many of the professional brewing world’s best recipes–from West Coast IPAs to imperial stouts and even sours–began as homespun standouts so spectacular they had to be unleashed on the world in order to improve it.

With this in mind, each year we hold an American Homebrewers Association sanctioned homebrewing competition, the champion of which gets their recipe brewed and distributed nationwide by Stone. This year’s winner, Chris Banker, helped keep us grounded to our homebrewing roots by introducing flavors consistent with our regional palate. His chocolate, cinnamon, nutmeg, chile pepper, and coffee-infused milk stout was built to mimic the flavors of Mexican hot chocolate, a beloved specialty from our neighbors to the south, as our collaborators from Baja California, Cervezeria Insurgente, will attest. Layered with tiers of earthiness, spice, and roast, this creamy, semisweet blue ribbon beer confirms that the spirit of the American homebrewer is not only alive and kicking but thriving at an all-time high.
___

This fall, Stone’s home brew competition winner along with Insurgente from Mexico brew up a beer that could quite possibly be the next New Belgium’s Cocoa Molé beer. I have had many awesome Mexican Chocolate stouts like Chocolate Sombrero, Luchador en Fuego from Clown Shoes, el Molé Ocho from New Holland or even the almighty, Cigar City Hunahpu’s and Three Floyds Dark Lord de Muerte. Each one being exceptionally awesome in their own ways. Now Stone not only makes a beer but brings in cultural expertise to help make it awesome. This Mexican Independence Day, I drink this! Salud!

Overall:
Madre es Dios, que es esto? I meant that in like a mind blow type of way. This is a lot closer to a Mexican Hot Milk Chocolate beer than may that I have tried. All around, it really feels like you are drinking Chocolate Abuelita Hot Chocolate. All around, the fact that it is a milk stout, it makes it to where it is just well balanced, flavorful and smooth. There is no heat at all, but I really believe that is not the point. The point is to make this as approximate as Chocolate Abuelita as possible. I really think that maybe even the pre-craft beer drinker may actually find this one very appealing. It really is ridiculous and better the Cocoa Mole. The only bitterness is really from the chocolate and coffee roast. Highly recommend getting this one before it is gone for good! Going to go pick up a couple bottle now… Hasta La Proxima y Siganme Los Buenos!

Anime Corner:
May from Backstreet Billiards for the PS1 was chosen for this pairing because I wanted to do something in relation to my culture en Mexico. I used May once for Cocoa Molé so I wanted to bring her back for this round as well. I am glad I did too. She fits greatly with the beer label, the history of Mexican pride and the indigenous as well as the roots of Chocolate and possibly the name as it seems to be a derivative of Nahuatl and Spanish. The fact that is fall also brings forth not just the Independence Day of Mexico but also closer to the Months of the Dia De Los Muertos Celebration which this beer totally is best suited. Overall There was so much I could think of with this pairing but I would rather leave it to the reader to decide how to view this one. 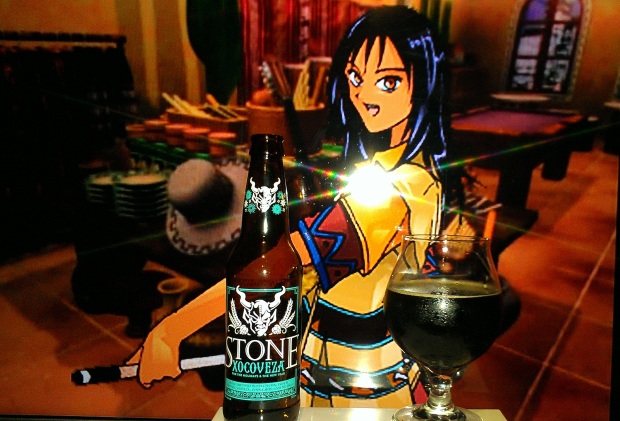